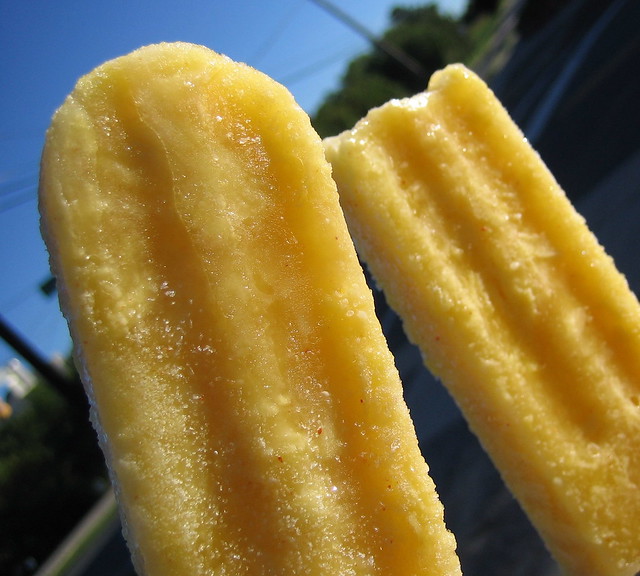 Another fun outing last week was the first father and son bike ride where we both had our own bikes. A big milestone! On previous rides we’d been together on the cargo bike or he rode his bike with training wheels and I walked.

I love taking him to ride his own bike. I usually feel safer being on foot so I can help him cross busy streets, deal with intersections, and cary the bike when we need to hustle or he gets tired. Slowly we’re extending the distance he’ll we’ll ride and walk. But this time he insisted that I ride my own bike. A silver commuter bike I’ve had for years.

Our ride motivation this time was going to Loco Pops. It’s our awesome local paleta store. They’re latin america style ice and cream popsicles made with fresh ingredients. These pops are special to me because Loco Pops helped cater my wedding & the boy LOVES them. We have a long father and son tradition of eating them together. Going on bikes to get them was the new part. It’s a desert that has taken over Triangle and our hearts in a big way. I love it so much I’m the Mayor of Loco Pops in Durham! (A silly but fun Foursquare thing.)

The boy did great on the ride! I was super impressed with his skill. But he’s still learning to bike in a straight line for a long stretch. The only thing I kept harping on was staying on the right side of the road. It’s so fun to just wander all over the small back streets in the neighborhood. There are few cars and lots of pedestrians and bicyclists. But I know how irresponsible some drivers are.

Not long after I told him not to ride on the sidewalk we were forced to. Loco Pops is on Hillsborough Road. The part we had to go down is long and straight where cars go way faster than 35 miles an hour. So as we got off the neighborhood street I advised my son to ride up onto the sidewalk and keep an eye out for people walking. This time of day the sun is low and we were headed due west. But it all worked out fine. It’s sad that there isn’t more room for bikes on this street. Even if there was a big lane I’m not sure I’d take my son on it until he’s done with training wheels and very confident on a bigger bicycle.